When I asked my kids if they’d like to go to a small concert, they were hesitant. “I don’t really like…‘concerts’ said my son, who had never actually been to a concert. I explained that it wouldn’t be a huge thing with thousands of sweaty people – it was happening in a barn at a winery (because Sonoma County). A friend had offered me a ticket, then two, and so it only made sense to buy two and bring the kids along. It would be their first.

My daughter, Evie, asked “is it Taylor Swift?!” I told her that no, it was not Taylor Swift. It was Rufus Wainwright. “Is he Taylor Swift’s brother?” I sighed. The songs that came to mind first were Leonard Cohen covers, “I’m Your Man”, “Chelsea Hotel No. 2”, neither of which would jog my kids’ memories. “You know when I listen to that guy singing old Judy Garland songs?” They looked at me blankly. “Ah, okay, you know that song “Hallelujah” in Shrek? That’s him.” Ohhhhhhh! They said. Then my daughter asked “does he know Taylor Swift?”

That sealed the deal. I dug out my old CD’s and started a 24/7 musical campaign to better familiarize them with Rufus’ work. My son continued his relative disinterest, occasionally offering a comment like “well, it’s not that I don’t like it…it’s just that I kind of…like other stuff better.”

Meanwhile, his little sister approached me tentatively while I was making dinner and asked, eyes wide with wonder, “do you think he might give me his autograph?”

Because I was mid-chop and mid-Rufus-singalong I didn’t think much of the weight of this question, and so I said “well I don’t see why not!” Oh, Amanda. When will you learn?

By the time I’d realized my error she’d long-since skipped gleefully off to the other room to resume playing with her tiny animal figurines. I peeked around the corner at her, all innocence and beauty, so unaware of the way modern musical events work. A soft ‘neigh’ came from her smiling mouth as she trotted a small horse across the coffee table. Okay, I thought. So…this is happening.

My first concert was The Dead Milkmen, at the State Theater in Kalamazoo. I was 13. The band spent about an hour signing autographs at Boogie Records earlier in the day, and I stood in line alone, patiently waiting my turn. One member drew a funny picture, another wrote a silly comment. I’ve long-since misplaced those autographs, but the experience left a lasting impression on me. I thought it only fair that Evie should have the same, though my hunch was that Rufus Wainwright wouldn’t be hanging out in a filthy record store amusing the masses beforehand. Still, I had to try.

The next time I was asked about the autograph, I said “well, we’ll do our very best, at least. Okay?” As we were getting ready for the concert, my daughter chose her outfit carefully. “This dress is really pretty,” she said, “do you think Rufus will like it?” Yes, of course! “I think I’ll definitely get an autograph if I have braids in my hair mama, I look so cute!” Indeed you do, little one.

Once we arrived, we walked up the long dirt path to the barn and settled ourselves, standing and sitting, on the concrete floor. Rufus, close enough to hit with a snowball, sat down at his piano and began singing “Montauk,” a song written for his daughter, which immediately overtook me with emotion. The kids took turns sitting on the one available chair offered up by a kind stranger, until Paulie sensed Jonah’s restlessness and offered to sit outside with him under the trees and stars. I stood behind Evie, watching as she listened intently, her head sometimes bobbing or swaying from side to side along with the music. There were moments her hands would rise into the air of their own accord and move to the sound, until she caught herself and put them back in her lap. When she could see, she studied Rufus at the piano or behind his guitar, nodding approvingly. When he told a joke she would smile, looking back at me to confirm she’d ‘gotten it’.

Before the first of his two encores, a good deal of the crowd got up to leave, not aware of the treat they were about to miss. I pulled my daughter forward and we sat together on the floor closer to the stage, my legs crossed and cold and falling asleep as she rested on them. There we sat for the remainder of the small, rustic concert – her small warm back melting into my chest; slow tears falling from my eyes into her braids as I listened to the voice of Rufus Wainwright, the angels-on-high power and beauty of it, and every memory created with that voice as it’s soundtrack came rushing quietly yet fiercely into me.

When he’d sung his last and it was time to go, the lights came up, people cleared out, but I sat for a moment, waiting for the pins and needles to bring life back to my legs. Once I’d stood, the question: “mama, is it time now? Can we get his autograph?” I looked at her eager face and around the nearly empty barn, which seemed to be very much lacking any signs of Rufus Wainwright in the flesh. I took her hand and said, “let’s find out.”

We approached the young man who’d been working the sound table, and I explained my situation. While saying the very casual “hey, so, my daughter would really love an autograph, is something like that even possible, or…?” I tried to convey with my face that I’d sort of led her to believe this was a real thing that might happen and pleasepleaseplease could he help? He looked at me, then at her, said “aw, I’ll see what I can do, hang on,” then disappeared for a very long time.

My daughter hopped with excitement, and when the boys found us I explained to them what was happening. Neither of them seemed very optimistic, and were barely tolerant of our endeavor. When the young man returned, he said “well, he’s hanging out with some friends so he can’t come out, but I do have this, which is the only one in the whole place, so it’s pretty special,” and he handed Evie a copy of the set list. She smiled politely and nodded at him, I thanked him for his trouble, and we walked away.

What he didn’t know was that I’d quietly determined to get that girl an autograph, and therefore it was going to happen. I say this as if any of my harebrained celebrity-based plans had ever come to fruition. To be fair, I’d had quite a lot of wine during the course of the evening, so my concept of celebrities’ boundaries was perhaps a bit fuzzy.

The security guards outside the home where Rufus and his friends were enjoying their fan-free time looked at us as we approached with the expression all security guards have mastered: disinterest and disdain.

“Hello, how are you?” Fine, ma’am. “Hey, I know he’s busy with friends, we don’t want to interrupt, I just wondered if my daughter could get his autograph on this set list? I mean, would it be possible for one of you to just take it in there? Or, is that not–” one of them shook his head and put up the palm of his hand, just as a small woman approached, talking rapidly. I caught the tail end of what she was saying, which was directed at my daughter: “honey do you want to come inside and meet Rufus?” Evie widened her eyes and nodded silently – we were both thrown off-track by this very sudden change of events, and therefore left speechless. The guard said something which the woman interrupted, saying “oh I know, I just can’t resist an adorable little girl, just this one time, I know, I know.” Evie looked up at me, victorious, as if to say see? I told you the cute thing would work!

The woman walked partway down the path toward the house, beckoning to Evie, who became suddenly very shy. “Mom, you can come too, it’s okay,” said the woman. So hand in hand, we went. 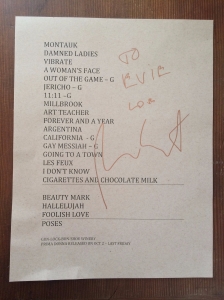 What followed was a whirlwind – me of course making an unfunny attempt at a joke as Rufus stood to meet us, in hopes his friends wouldn’t be too irritated. They laughed and waved off my concern, saying ‘oh it’s totally fine!’ Evie collected all of her nerve to answer Mr. Wainwright’s question of “what’s your name, sweetie?”, which he misheard as ‘Evan’ the first time. When he said “it’s nice to meet you,” she quietly managed a “thank you,” and a “nice to meet you, too.” After this exchange I reached for Rufus’s hand as if that’s something one should do, and he graciously went along with the handshake while I ignored the well-masked ‘who the hell are you?’ look on his face. I thanked him and apologized for interrupting, to which he smiled and said ‘sure’ or ‘it’s fine’ or ‘no problem’ or any one of those things people say when they’re probably actually irritated but this is part of the gig so what’re they gonna do?

We again said thank you, goodbye, and then waved to everyone like we were friends leaving a party. There is of course more to the story – securing pictures despite having no space on my camera; the details of the couch Rufus was sitting on when we first walked into the room and the way his hair caught in the light when he knelt down next to my daughter; chatting quickly afterward with the godsend of a woman who’d gotten us in, and taken the photos, and texted them to me; the kindness Rufus showed my daughter, resulting in his music being on the top of her permanent request list ever since, (sorry, Taylor…thank you, Rufus); how, as we walked back down the dirt path toward our car, Evie skipped and sang and said “mama, he was really nice. And funny.”

But the short story is: My daughter asked me if she might be able to get an autograph from Rufus Wainwright. And so we did.

To read about the other celebrities I’ve met and humiliated myself in front of, click HERE