The first time I really sat down to listen to him -I mean really listen, not just sing along to his hits that made their way to the radio – was on a break from K-Mart mopping the dining room floor of Full City Cafe in Kalamazoo. It was the end of the night, all of the customers were gone, and my co-worker Mandi asked me to help her clear all the tables out of her way so she could show me the dance she was choreographing. I was 18, and the song was Pheromone.

“Listen to the words, you’ll hear what it’s about” Mandi said as she dipped and arched, her reflection in the pastry case wobbling against the glare of the fluorescent lights above. “See, he’s watching them,” and she’d turn, and again, and sing along: “Her eyes are closed, but there’s no penetration, he just makes her put the pistol to his nose while he masturbates….” My world cracked wide open.

The next day, I bought my first Prince album, Come, which was joined in short order by any I could find used at Repeat the Beat on paycheck day.

Mandi moved to Chicago and we wrote letters back and forth. She drew Prince doodles in the margins, and told me about a bar she’d found which hosted a Prince night once a month. I was only 19, but I packed my shiny black plastic pants, drove to Chicago, and Mandi and another friend snuck me into the bar. All night the DJ played Prince after Prince after Prince. We danced, packed and sweaty, for hours. There was nothing I could imagine that could be better than this night.

The first time I saw him perform was in Detroit; I was 20. A friend asked if he could come along, but I wouldn’t let him because I wanted the experience to be mine alone. I stood on grass above the amphitheater along with the other cheap-seaters and danced through the entire three hour performance. There was a lot of stage show involved, a lot of medleys of hits, a lot of sex and grit.

A week later, I packed all of my Prince CD’s along with any other possessions I could fit into my little car, and started my drive to California. When I got there I quickly discovered, for the first time in a life which had thus far been filled to the brim with siblings and friends, what loneliness was. I spent vast amounts of time alone. I would blast Prince while cooking, while napping, while cleaning; putting on one album after another, enraging my roommate who would come out from his room and say “Amanda, must you really play ‘Diamonds and Pearls’ so loudly?”

To which I would reply, “I must.” Listening to Prince was like having Mandi in the room.

The next time I saw him perform was in San Jose, California. I was married by then, and my Sister-in-Law came with me. My husband and I had a baby, who was sick on the day of the concert, but I put aside my maternal instincts and left him in the care of a cousin who lived nearby. During the show I had to excuse myself to the ladies room to express milk from my painfully engorged breasts twice, and by the middle of the concert I’d become feverish with my son’s illness; but I still found the energy to dance in front of my bleacher seat way, way up in the nosebleed section of the stadium.

I noticed that his performance style had changed. He’d converted to the Jehovah’s Witness faith by then and the concert was less about sex, more about music. He performed full songs, stopped to play an acoustic, solo set, and invited people from the crowd up on stage with him. From where I stood, he was about the size of my pinky fingernail.

Over the years, there has been something so consistent and stable about Prince in my life, more than any other band or musician I once loved, or still do. Prince was a connection to an older version of myself, the young woman just discovering herself, and the person who I am today. Incidentally, I am still discovering things about myself, and nothing else in my life has been as steady of a soundtrack to all of those changes as much as Prince.

The last time I saw him perform was at The Fillmore in San Francisco, a setting so intimate and filled with musical ghosts I couldn’t believe I was so lucky to be there at all. The doors didn’t open until 11:59pm. When my then-husband and I got inside, we stood in the back as we always did at performances, because he is very tall. This time, however, I couldn’t stay with him and look at the backs of people’s heads. I apologized and then made my way up through the crowd, slowly and patiently, until I was only two people back from the edge of the stage. It was perfect.

I thought, “if this is as close as I ever get to Prince, I will die happy.”

Two weeks ago today, I was hanging out with my boyfriend’s son, who is 17, and discovered that he’d never seen Purple Rain. After much trial and tribulation and hooking up cords to TV’s, we finally settled in with our popcorn, and pushed Play. He fell asleep before the movie ended, but I know it’s all in there, in his brain, because I sat watching until the very end, crying like I always do, and you can’t just not hear Prince when Prince is playing. 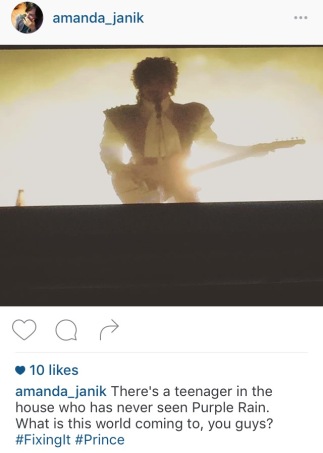 A week ago today, I was sitting with Mandi in her apartment in New York. I haven’t seen her in three years, and I was on the verge of tears the entire time; my emotions runneth over whenever she’s around. I told her I’d shown Purple Rain to the teenager and she started quoting the movie, laughing. Prince always made her laugh. She said “man, that film changed my life. I got so much of my everyday material from that movie.”

Then she said “remember when I’d make you watch me dance to Pheromone at work?”