**Originally published on Facebook (before I knew what a blog was…)

When I was an awkward first-grader, I met a girl willing to accept my weird hair and inappropriate goofiness, and I was doggishly grateful for her friendship. She invited me to sleepover birthday parties, of which I’d had no previous experience, but after the first obsessively looked forward to every year. She introduced me to a world where, after eating pizza and drinking pop, you could sit really close to the TV and watch a movie – then suddenly popcorn would appear from a mysterious parent-figure. It was amazing.

As the years went by, we faded in and out of “best best friend” status, but she remained a constant in my life. Whenever I would wander over to her at lunchtime and quietly sit next to her, without skipping a beat in whatever she was saying to whoever she was saying it to, she would push something from her lunch over to me and say “shaaaaare” in this weird ET way.  I loved her.

On the first day of 6th grade, we had the same homeroom teacher and stood next to each other outside the door before class. Small talk led to random, cryptic jokes, which in turn led to the reminder that we had the exact same sense of humor. That was that, until the end of time.

When we graduated from High School, Jessica bought me a set of dishes, which I thought was hilarious, and perhaps the oddest gift you could give to your best friend. Only after several moves did I realize how thoughtful and practical it was – though I’m pretty sure there was a joke in there, too. I still use those dishes every day – minus one bowl that I forgot was on the top of my car a couple of weeks ago and after 4 blocks flew off, shattering blue ceramic and tortilla chips everywhere.  (15 years and 16 moves later, I finally managed to break one by being a dumbass). I was devastated.

Even though I moved thousands of miles away, I still got grumpy when Jessica moved from Michigan to Florida. I felt disconnected from her somehow and couldn’t relate to where she was, or picture her glitter-gluing the handmade cards she’s famous for when the mental image was palm trees in the background instead of snow. But, I had to forgive Florida for taking Jess, because that is where she met Matt. Who knows what their courtship was like? Being so far away I could only imagine…and at the time I pictured it like this: walking on the beach with Coronas, not really talking but testing out monosyllabic jokes on each other, poking each other in the arm and saying, “haha” in that voice of the kid from the Simpsons. I’ve never actually confirmed this theory but I’m sure its true.

The most important thing for me is that Matt got Jess. He made her laugh, a lot, and to me seemed to be a ‘gentle giant’ type of man. He loved what she loved. They had a bajillion animals, from what I could tell – including a huge pig named Bean, which delighted my son Jonah when we visited briefly one June. The second most important thing about Matt was that he agreed to move to Michigan, which I am so grateful for…even though I live in California. It meant I got to meet Matt and see what he was like with my Jessica. And that I could approve, which I thought was terribly important, of course.

Matt seemed to me the type who would opt out of holding someone’s baby – whether it be fear of dropping the kid, or just not being sure what the hell to do with it once it was in his arms. So naturally, immediately upon meeting Matt I thrust Jonah into his arms, much to the delight of Jessica and myself. I think my husband was sympathetic, but what are two very tall, imposing men going to do in the presence of two very short, giggling women? Humor them, that’s what!

The moment was a brief one, but I would always pull the resulting photo up in my mind whenever talking with Jess about Matt, whether it be what TV shows they watched or what Matt liked best about his trip to Pebble Beach for the car show there.

I guess the point of this is – I really liked Matt. He was a good man. I didn’t actually know him all that well, but I felt like I did through extension of Jessica, and I am saddened beyond words by his death. Matt was involved in a motorcycle accident last week, and tragically, did not survive.  I have never felt so far away from my friend, and have never hurt so much over the death of anyone I’ve known. He will be greatly missed.

I found the photo from that moment with Jonah and Matt. I love the expression on both of their faces, especially Matt’s. You can see that he’s been won over, even as Jonah skeptically checks him out, wondering if he’s about to be dropped. Thank you for this moment, Matt. Our love will always be with you. 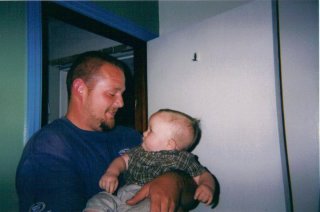