1. I thought Lady Bird was…fine. I don’t know if I went into it with too many expectations from the hype, or maybe it was too much of a female-experience film to have gone with my boyfriend, or I just didn’t have similar enough teenage experiences with which to relate and re-live. I liked it. I just didn’t swoon over it.

2. My boyfriend and I secretly went to Hawaii so he could look at small pieces of land and dream up a life full of 2×4’s and nail guns scattered around, slowly forming themselves into a house, slowly transforming itself a home. The trip was a secret because, even though it was technically a work/research trip, and I brought work along with me and spent more time inside trying to meet a hard deadline than I did on the beach, all of that still happened on a tropical island, and some people hear ‘tropical island’ and think “you clearly live a life of leisure and luxury and should be punished for this.” So it felt easier to keep it to ourselves. As it turns out, not being able to talk about your upcoming and then recent trip with your kids and friends takes a lot of the joy out of it, I’m not gonna lie.

3. I contemplated whether I might be an alcoholic. I awoke in the middle of the night during the aforementioned secret vacation with some words in my head, which I typed into the glare of my phone before falling back to sleep. When I next looked in my phone’s notes, this is what I’d written:

We are both fighting so hard/not to become our parents;

This scrappy, calculated struggle/is aging us even faster.

The day I realized I wasn’t becoming my mother/but in fact, my father,

I set my drink down on the melted-ice puddle of water by the sink/and said a hard, sad/Goodbye.

In reality, though,/I stood there by the sink,/sipping,/thinking about other things;

Somehow made a decision I wasn’t aware of/to remain intentionally oblivious/to the course my life was taking.

And every morning I awoke with regret,/sometimes large, sometimes small;

I was the only thing in my life holding me back from being/the dynamic firepower I was born to be.

And I just blinked, and thought,/‘hm’.

Then I sat down to read/so I didn’t have to be in my own head anymore;/Just like my dad would do.

The morning after our plane landed back in reality and we’d slept in our own bed, I didn’t feel like drinking anymore. I didn’t give myself a lot of rules or parameters, aside from seeing what a month off would feel like. I did a lot of self-observation. Too much, I’m sure. After nearly a month of zero cravings for alcohol, I experimented with social drinking, and discovered that I was able to stop there. Maybe I get to be my own person, after all. 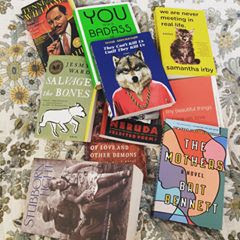 4. I read 52 books this year, and the one that took the longest to read was the best and most challenging and thought-provoking and guilt-inflicting and, weirdly enough, validating. They Can’t Kill Us Until They Kill Us by Hanif Abdurraqib. I have alotalot of thoughts about it, but I’ll just let you read it. Then, we can discuss. I will suggest that when you read it, do so with your headphones on and prepped to look up new tunes as you go.

5. I don’t have a lot of time for TV, but I broke down and watched “This is Us” because I love a good cry as much as the next emotion-stuffer, and all I ever heard about it was “every episode makes me cry!” I did cry, don’t get me wrong. But I only cried about twice. Jury is still out on whether it was worth it.

6. I tried to get a 6-month job in another country for a lot of reasons. Number 1: the pay was amazing (aka I could have put a healthy chunk of money into my kids’ college funds AND paid off my debt. A girl can dream), and it was in Mexico. Number 2: I’d really like to get out of Dodge – ‘Dodge’, in this case, being America. Number 3: A woman in the life of some kids I know vehemently hates the idea of my trying to do things to improve my life, because if I do she might not have anyone to pettily vaguebook about all the time, and she’d need to get a new hobby. As soon as she posted one of her now-famous pity-baiting posts about my trying to get this job, I was inspired to double-down on my efforts to actually get it, rather than just doing it as a fun, far-flung fantasy. Number 4: I think my kids need to live in another country. I’ve said this since before I even had kids, but sometimes things don’t shake out the way you want them to. So, plan B might just be to get short-term jobs in other countries, so they can at least get a taste. It’s a start.

7. I thought about friendship and family a lot. My year-end summation is that there’s a whole heap of Great in these areas. There’s also a lot of disappointment.

8. I did some therapy. My therapist thinks I talk too much around my point as an avoidance tactic, and I can tell when he’s getting bored. Sometimes he makes me do things like talk to myself from two different perspectives. I hate it when he does this because it seems so stupid, and because it makes me ugly cry. I also tried anti-depressants, but I didn’t ugly cry any less, so I stopped. Also, my life is pretty fantastic, so that’s always a natural mood-booster.

9. I completely failed to put on even one Mortified show in the year 2017. Not even one. The reasons are partially circumstantial, but partially just my total and complete lack of motivation.

10. I sent a Christmas card to my best friend, as I do every year. I found out later that I’d addressed it as follows: Jessica, Matt & Animals. When she sent me the picture of the envelope, it took me a second to figure out why she was sending me this picture. It made no sense. But, then I remembered. Matt died. Like, over seven years ago. When I say best friend, I don’t mean “this is one of my many best friends because I have a lot of best friends.” I mean, we have been friends since 1st grade, she knows me, I know her, we don’t really need to do more than grunt at each other to know what the other is thinking. Every year on the anniversary of her husband’s death I feel a little hard twist in my chest because, even though it’s been some time and she’s happy now, a heartbreak is always a heartbreak, even for a minute once a year.

Happy 2018, everyone. May it be full of love and clarity, with less overall bullshit.

2 thoughts on “Ten Mediocre Confessions from 2017”